A couple of weeks ago, when Portuguese newspapers talked about the loanees who’ve been at Porto this season, they never considered the permanent signing of Marko Grujic.

The Liverpool midfielder hadn’t managed to earn a place in the starting team, and was expected to return to Anfield at the end of the season.

However, things had a big change lately. Due to injuries and suspensions impacting teammates, Grujic had the chance to feature in both Champions League clashes against Chelsea, and his positive performances drew some attention.

It was first the English media who claimed other clubs are now interested in his signing, and according to newspaper Record today, there’s a chance Porto will try to keep the player. 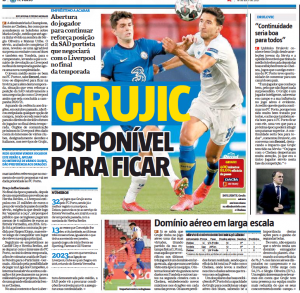 Their story says Grujic has shown availability to stay with the Dragons, and that will make Porto stronger once they get to negotiate his transfer with Liverpool.

Record recalls there’s no buying option in the deal. They say Liverpool demanded €23m for the transfer last summer, and now with his will to stay in Portugal, the Dragons could find a better price.

Grujic signed for Liverpool in a €7m deal from Red Star back in 2016. Apart from his 16 appearances for the Reds, he’s had loan spells at Cardiff City, Hertha Berlin and now Porto.