Liverpool registered a crushing 5-0 victory over Huddersfield Town at Anfield on Friday night.

With their latest win, the Reds maintained pressure on Manchester City at the top of the table and also made sure the goal difference between the two sides is reduced to a margin of four (City 68, Liverpool 64).

Naby Keita opened the scoring before Sadio Mane and Mohamed Salah each scored a brace to seal the match.

Though the former Chelsea man assisted Keita’s goal in the first minute and had a brace, the Egypt international was not included in Italian newspaper La Gazzetta dello Sport’s European Team of the Week.

Instead, his teammate Mane has made it to Gazzetta’s European Team of the Week and the ex-Southampton star has been given a rating of 8 for his stellar performance against Huddersfield. 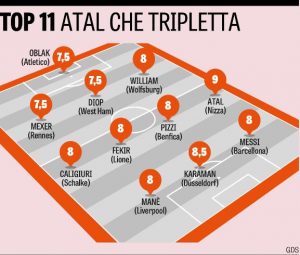 The same rating given to Barcelona’s Lionel Messi, who is also made it to this week’s list.

It should be seen if Mane and Salah can continue their impressive form when they face Barca in the Champions League semi-final.

Nabil Fekir, who almost moved to Liverpool last summer, won a place in the midfield.