Kylian Mbappé has been widely discussed as a main target for Real Madrid next summer, and Liverpool are also said to be interested in the Paris Saint-Germain star.

Sport have looked at the Madrid and Liverpool interest in the 21-year-old.

The forward’s contract lasts until 2022 and a renewal doesn’t seem imminent. His market value is around €180m and the Ligue 1 side are reluctant to sell their prized asset.

It’s claimed Los Blancos are not the only club who are ‘going to give everything’ as the Reds are ‘willing to fight’ for his signing.

Jürgen Klopp has been following the World Cup winner since 2016. A year later, the English champions tried to sign him after the former Borussia Dortmund manager met with the player. Since then, the German has a ‘direct line’ with Mbappé.

The Covid-19 crisis makes it difficult for the Spanish giants to invest heavily in signing the France international.

On Tuesday, Eduardo Inda told El Chiringuito that Zinedine Zidane has given his approval for a swap deal involving Vinícius Júnior and the PSG attacker. The Brazilian has a market value of €50m and there’s still a difference of €130m that needs to be sorted out.

If the former AS Monaco star decides against signing an extension, he would have a year left on his contract, and as per the report, PSG would then be pressured to lower their demands.

Even then, Sport states, Real Madrid will need to convince the Paris based club to sanction Mbappé’s sale. Apart from this, Zidane’s side will have Liverpool as their ‘main rival’.

Klopp ‘wants to coach’ Mbappé next season, and so does Zidane. The two managers are said to have a ‘direct line’ with the player. 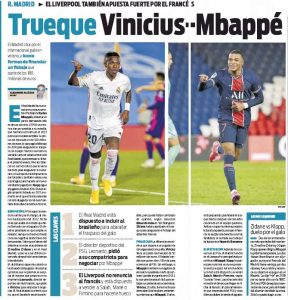