Germany losing 6-0 to Spain on Tuesday evening is something of a national football disaster.

It certainly wasn’t expected and there was some confidence prior to the match, with the Germany FA even suggesting Manuel Neuer could get a clean-sheet.

That quite clearly didn’t happen, yet the goalkeeper has come out better than every other Germany player in Bild‘s player-ratings.

Neuer got a 3, whilst Leeds United’s Robin Koch, Manchester City’s Ilkay Gundogan, Chelsea’s Timo Werner, and indeed every other German outfield player who started the match, all got 6.

1 means very good, 2 is good, 3 is average, 4 is passable but still lacking, 5 is deficient and 6 is insufficient. 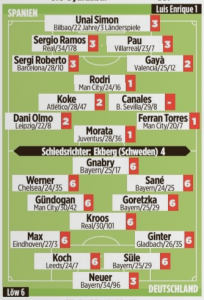 A 6 is the lowest possible grade and, taking it back to the school grades, it means that not only were things not up to standard, but there was even a failure to understand the basics.

Not great for Koch, Gundogan and Werner.

Manchester City players did better for Spain, with Rodri and Ferran Torres both getting 1.

Club ‘already in negotiations’ with Leicester over player – Foxes asking...