There was a time in the season where we wouldn’t even hear of Marko Grujic, as the Liverpool loanee was nothing more than a rotation player at Porto.

However, things changed in the past few weeks, and we can now only see compliments from the Portuguese media towards the 25-year-old.

Newspaper O Jogo features a piece today with a headline saying ‘best loanee increases performances’, showing that Grujic is by far the temporary signing who’s been most used since manager Sérgio Conceição took charge of Porto in 2017.

That, of course, will lead the Dragons to try to find a permanent deal with Liverpool, and the report has something to say about that as well. 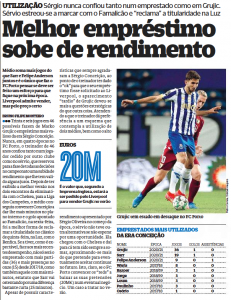 O Jogo first says that Porto could only afford the signing in case Liverpool accept to negotiate the player’s sale for less than €20m.

Then they claim that this deal will be negotiated in the summer, after the end of the season, so there’s still time for Grujic to have a few more convincing performances before then.

Since making the move last year, the midfielder made 36 appearances for Porto, and started getting chances in the starting team in the clashes against Chelsea in the Champions League.