There’s a lot to be said about loyalty in football, but sometimes a player loves a team so much that it doesn’t matter who comes knocking, they simply aren’t interested.

Francesco Totti was one of those, with it well know that Sir Alex Ferguson wanted him at Manchester United, but the legendary forward simply said no and stayed at AS Roma for all his career.

Perhaps it’s the club, but Lorenzo Pellegrini is of the same ilk, having turned down advances from Liverpool and Arsenal in the past.

That’s what Corriere dello Sport say on Friday when looking at the possibility of the midfielder signing a new contact with his childhood team, one that would get rid of a release clause that has loomed over the Serie A side for a while.

For €30m, he would be a steal for many sides, and yet despite Liverpool and Arsenal having ‘tried’ for  him in the past, it appears a stay at Roma is planned. 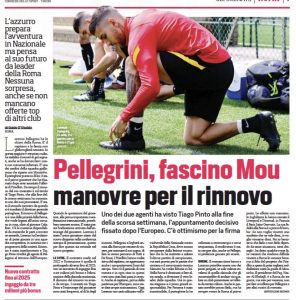 Corriere explain the player ‘trusts’ the project put in place by the Friedkin family and is hoping to get some satisfaction in the future by having José Mourinho in charge.

So, it either means Mikel Arteta and Jürgen Klopp are going to have to be increasingly convincing if they want to stand a chance of having the player in their team next year or Liverpool and Arsenal are simply going to wave goodbye to Pellegrini.