Even though it used to be Benfica who were heavily linked with the signing of Wolverhampton Wanderers full-back Ruben Vinagre this year, we now see their city rivals Sporting getting seriously involved in the chase as well.

Portuguese newspaper A Bola writes today that the Lions are working to land the 22-year-old this summer.

They expect to sell wonderkid Nuno Mendes in a huge deal and want the Wolves player to replace him.

It’s said Sporting already contacted the Molineux side to get information on a potential deal, and believe they can sign him for around €10m.

On the Lions’ side, there’s the player’s wish to stay in Portugal, following his loan spell at Famalicão. Against them, there’s the competition from Benfica.

A Bola adds that with Bruno Lage taking charge of Wolves this summer, things could still change depending on how much the manager wants the player at the club. 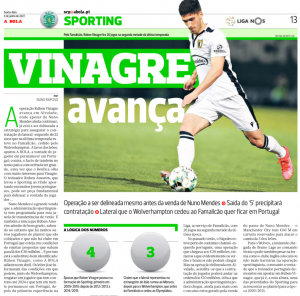 Coincidentally, Ruben Vinagre is also featured today in an interview with O Jogo.

The full-back talked about the good season he’s had at Famalicão, and was quizzed about the rumours which have been linking him to the likes of Benfica, Porto and Sporting.

“They are three big clubs. I’ve seen some things that people send me and that make me very satisfied. Just the fact of being linked is a sign that I’m working well.”

Asked if he’s prepared to play for any of them, he has a positive answer, but makes it clear it’s Wolves who will take a decision on his future. 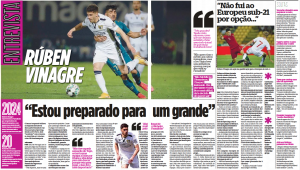 “I think so, I’m ready. I have a lot of Premier League background, several coaches who helped me a lot, like Nuno, with whom I grew up a lot, Ivo Vieira, who also helped me a lot, and I’m prepared in case that happens. However, I’m a Wolverhampton player.”

The last question was the interview was about what’s the course he wants for his career.

“My desire is to continue playing and be happy.”