Tottenham Hotspur’s interest in Lille goalkeeper Mike Maignan could give Hugo Lloris a ‘way out’ in the next market, according to L’Equipe.

The report suggests that as of today, ‘only Manchester United look like a possible home’ for Lloris, whose contract at Spurs runs down in 2022.

It’s claimed the France international is resigned to the club’s policy, which he believes oscillates between real sporting ambitions and ‘trading’ young players.

At 34, the World Cup winner is aware he can take on one ‘big challenge’ before he retires, and that, according to the report, could be at Manchester United.

David de Gea and Dean Henderson are the two main keepers at the club, and the latter has impressed during the Spaniard’s absence in recent weeks.

L’Equipe are of the belief De Gea, who has a contract until 2023, is ‘no longer’ in United’s plans.

There’s a suggestion De Gea’s exit from Old Trafford could see Lloris take advantage of the situation to leave Tottenham for United in the summer transfer window. This in turn could allow Spurs to make an attempt for Maignan. 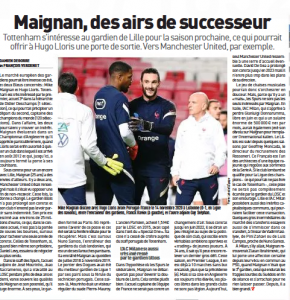 ‘The game of musical chairs could therefore be orchestrated smoothly,’ states L’Equipe

For this to even materialise, United first have to cut ties De Gea, and even if they do, it’s not clear whether Lloris would be a target to replace the Spain international.

Lloris could leave José Mourinho’s side after this season, but his chances of ending up at Manchester United are very slim.