Leicester City are interested in the signing of Vitória Guimarães defender Abdul Mumin, according to today’s reports from the Portuguese media.

Newspaper A Bola features a story claiming the 23-year-old has been ‘impressing the scouts from the Premier League’, and officials from the Foxes are among them.

It’s reported the Leicester City have recently been watching the player to ‘study’ the chances of going for his signing in the future.

Mumin is said to have the qualities which are ‘appreciated in England’, due to his speed and strong defending. 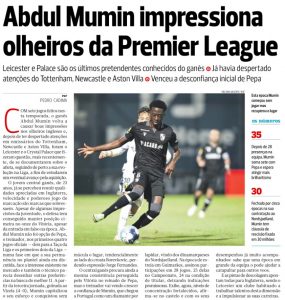 There is, however, a big interest in the Mumin lately.

Only in the Premier League, he’s already drawn the attention from Aston Villa, Crystal Palace, Newcastle United and Tottenham Hotspur.

However, A Bola writes that Leicester City are a club who are ‘used to working talents of this dimension and boost their careers’, so that may be an advantage the Foxes have over others.

For now, the outlet doesn’t even mention how much it’d cost to take him out of Vitória Guimarães.