Atalanta’s Robin Gosens is drawing attention from clubs in Serie A and the Premier League following a good campaign with the Italian side.

The 26-year-old, whose preferred position is at left-back, has been used a left wing-back this season and has managed nine goals and eight assists in 30 league appearances.

According to TuttoMercatoWeb, Leicester City and West Ham United are chasing the German.

It’s claimed the Foxes and Hammers, along with Chelsea, are the three English clubs who are ‘strongly interested’ in the goalscoring wing-back, and they are pushing for his signing.

Apart from the aforementioned clubs, Juventus and Inter Milan have also thought about signing the player on several occasions.

Gosens still has two more years left on his contract and the report states that Atalanta have slapped a valuation around €25-30m on their man.

Leicester have Ben Chilwell as first choice left-back, with Christian Fuchs as his backup. David Moyes has Aaron Cresswell and Arthur Masuaku as the two left-backs in the squad.

It’s unlikely either Brendan Rodgers’ side or West Ham will try to make an approach for Gosens, unless one of their left-backs are sold this summer. 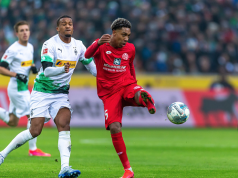