AS Roma have tried every trick in the book to get Riyad Mahrez from Leicester City for less than the Premier League club want to sell him for.

Monchi, Roma’s new sporting director, has taken tactics he used repeatedly at Sevilla. Dressing up a low fee as a higher fee with all kinds of bonuses, and even making a loan with purchase option somehow look beneficial for the selling club.

The problem for Roma is that any club with a reasonable recruitment department will be well aware of how Monchi operated at Sevilla so it’s going to become increasingly difficult for the Spaniard to get bargains, and Leicester City are likely among that bunch of educated clubs. 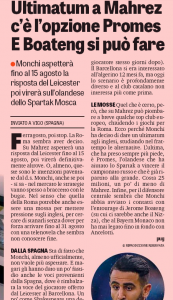 That’s supposed to, in part, put Leicester under some further ‘pressure’.

It’s hardly likely to work, and whilst Roma insist there’ll be a conclusion to the transfer soon, the Italian club walking away doesn’t mean they’ve won, it’ll be quite the opposite.