Kicking off to a nightmare start when his transfer to Leicester City saw him miss the registration deadline by a few seconds, Adrien Silva’s time at the King Power Stadium never really improved.

Rarely used by the various managers in charge, the midfielder ended up on loan at AS Monaco, where he felt he might have done enough to earn himself a permanent move.

That wasn’t to be, however, meaning another escape plan needed to be drafted, which saw him end up at Sampdoria in Italy, where he linked up with former Leicester manager Claudio Ranieri.

He hasn’t been a regular just yet, but he’s getting there, starting the last three games in Serie A as he slowly carves his way into the first-team.

The main point is that he seems happy with his decision, discussing it with Gazzetta dello Sport in a short interview on Wednesday. 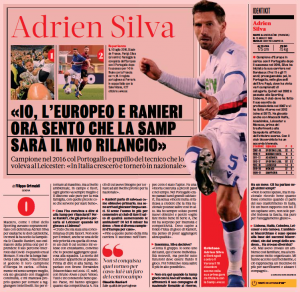 Asked why he chose Sampdoria, he said: “I think it was a combination of several factors. Not only because of the manager, even if one of my priorities was to find a club whose manager wanted me with enthusiasm, convinced that I could add something to the team.

“The history of Leicester belongs to the past. Before saying yes to Sampdoria, I spoke with Bruno Fernandes, with Bruno Alves and also with (Miguel) Veloso. All three know this country well, they explained to me how competitive Serie A is. It was what I needed to get back to the high levels and ready for the national team”.

It’s clear that Brendan Rodgers wasn’t particularly convinced that Silva could help him out, especially with the likes of Youri Tielemans, James Maddison and even Dennis Praet at his disposal.

This move was clearly the best for all parties, and it seems everyone has moved on somewhat amicably.