Leeds United remain in contact with HSV Hamburg over a possible loan deal for Crysencio Summerville before the end of the transfer window.

That’s according to BILD, who say the ‘mobile phone calls’ between the two clubs ‘are currently running hot’ as they look to work out a deal.

Summerville has been named as a target for the German side over the last week, with them keen to add reinforcement to their forward line before the end of the January transfer window.

Talks are underway about a potential loan deal, and Summerville is thought to be keen on the move as he wants more game time than he is getting at Elland Road.

The big complication is Leeds boss Marcelo Bielsa, with a recent report stating that he doesn’t want to lose the youngster.

Reports have made it clear that there are several snags to making a deal happen, but it seems the two sides are working hard, or at least continuing to talk, on the potential transfer.

Indeed, according to Hamburger Morgenpost, the two clubs held talks yesterday and ‘hope is alive’ that they can reach an agreement.

Whether it happens remains to be seen but should it, there is one man who believes it will be a success. 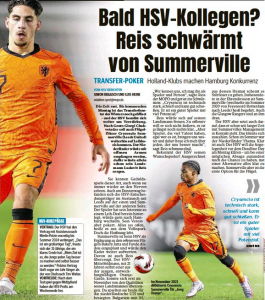 That’s former HSV coach Martin Jol, who had Summerville on loan at Ado Den Haag in 2019 and was left with a positive impression of the Leeds man.

“I have rarely seen such a nimble lad as Summerville. The boy is lightning fast, especially suited for counter-attacking,” he told BILD.

“That was the shortcoming at the time. His shooting qualities were not particularly strong.

“I saw him a few times later in Leeds United games, and there I have to say that his game has grown up considerably.

“He is at home on the right-wing position. If I may compare him to an ex-HSV striker, he would be a guy like Jonathan Pitroipa.”