Home Europe Koeman invites Catalan newspaper to his house, Barca job would be a...
SHARE

For the second time in recent months, Ronald Koeman has conducted a lengthy interview with a Catalan newspaper. The Everton manager invited Sport to his Merseyside home, and the resulting articles take up the first five pages of their Thursday newspaper.

After talking to the Everton manager about him looking slimmer, Sport get down to the real business.

Journalist Toni Frieros: “You know what I’m going to ask you.”

Koeman: “I can imagine it (with a broad smile).”

Frieros: “You appear in all the lists to take over from Luis Enrique at Barca.” 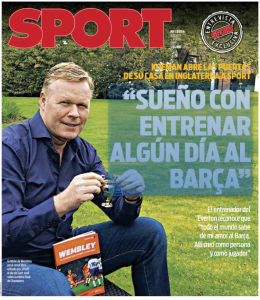 Koeman: “I feel flattered and I like that you think of me.”

Frieros: “The most important thing is to know what you think…”

Koeman: “(Long silence) You see, everyone knows that I am from Barca, they know my love for a club where I grew up as a player and as a person.”

Koeman: “Look, in my life as a professional coach I have two dreams to fulfil. One, coach the selection of my country, Holland. I have been able to do so, but my obligation to Everton has prevented me.”

Frieros: “And your other dream?”

Koeman: “My other wish, my other dream, is to one day coach Barca. That’s the truth.”

Frieros: “You put a lot of emphasis and accent on ‘one day’…”

Koeman: “Yes, because I now owe to Everton. We have a very powerful and exciting project and we will reinforce our best to try to reach next season the Champions League.”

Frieros: “What if he called the club?”

Koeman: “That is a hypothesis in which we cannot enter too much. In football, as in life, as in business, everything can be talked about and discussed.”

The Everton manager is clearly trying to keep his current club and supporters happy whilst at the same time flirting with the idea of taking over at Barcelona. It’s not an easy balancing act to pull-off, but Koeman knew he’d be in such a situation when he invited Sport to speak to him. 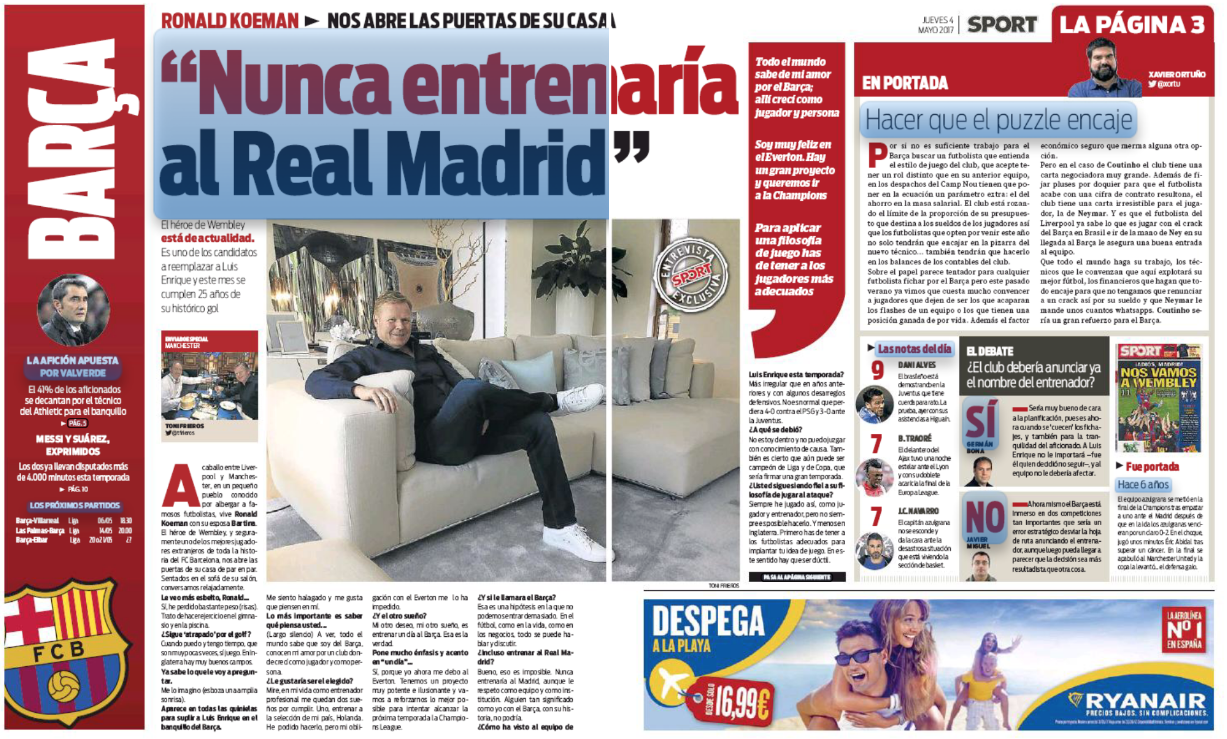 Koeman isn’t currently one of the frontrunners to be the next Barcelona manager, and perhaps this could be seen as a last throw of the dice. The Dutchman has an €8m buyout clause with Everton, which may not seem like too much for the world’s biggest clubs, but the Catalan press have consistently repeated it’s not something Barcelona would want to pay.

The Everton manager isn’t who Barcelona’s fans are calling for, despite his glorious history with the club, and a few pages after Sport’s Koeman feature they publish the results of a poll, asking Barca fans who they want.

Koeman got 7%, and was even behind out-of-work Laurent Blanc, who got 9%, out in front is Ernesto Valverde with 41%, and Jorge Sampaoli on 30%.

In a comment which will please Barcelona fans, Koeman said he wouldn’t consider manager Real Madrid in the future, given his Camp Nou past.