Zielinski has long been named as a target for Reds boss Jürgen Klopp, who was keen to bring him to Anfield back in 2016.

Liverpool have regularly been linked with a move since then without a deal happening over the last five years of transfer windows.

The interest has not gone away, though, with a recent claim from Italy stating that Klopp was still following the Polish midfielder ‘with great attention’.

Indeed, it was suggested the Napoli man could be a target this summer, particularly if Georginio Wijnaldum doesn’t extend his stay at Liverpool, with his contract expiring in the summer.

Whether that happens remains to be seen, with the Serie A side unlikely to want to give up one of their key players easily and president Aurelio de Laurentiis known to be a tough negotiator. 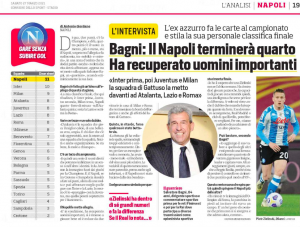 In the meantime, Zielinski continues to impress on the pitch, with Bagni detailing his admiration to Corriere Dello Sport.

“I suspect nobody has a Zielinski,” he told the newspaper.

“He has inside him crazy plays, the ability to play with both feet, an intelligence that is needed to make a difference.

“Sometimes I even doubt that he doesn’t even know how strong he is and if they notice it, Real Madrid or clubs of that level could wake up.

“For me, we’re talking about a footballer from another planet.”