With David Silva now out of the picture seeing as he signed for Real Sociedad, Lazio have to look at alternatives.

We mentioned Felipe Anderson on Tuesday, but one name has grown considerably over the past 24 hours, and it’s that of Liverpool’s Xherdan Shaqiri, according to Corriere dello Sport.

The Switzerland international was barely used by Jürgen Klopp over the course of the season, and it would make sense for everyone involved if a parting of ways was organised.

Lazio are aware of this, and while there are no ‘explicit confirmations’ from either the Serie A side or the intermediary who has offered Shaqiri to the Italian club in the past, ‘a certain interest in him has been verified’.

In fact, ‘it will be certified in the next few hours’, and it ‘must be reported for two specific reasons’. 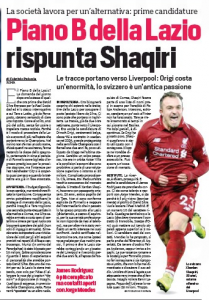 Number one is that ‘Lazio are courting a Liverpool player’ and the second being ‘Shaqiri was part of a list of names examined for the legacy of Felipe Anderson’ back when Joaquín Correa was finally bought.

Igli Tare, Lazio’s director of football, ‘fell in love with him when he was playing for Basel’ and that doesn’t appear to have changed.

Either way, the player is seen as a ‘market opportunity’, especially with Klopp wanting to get rid ‘at an affordable price’.

He ticks all the boxes…