Home Europe Jese has debut to forget, as another Middlesbrough target shows him how...
SHARE

After all the fanfare, the weeks long struggle, ‘Jesemania’, Las Palmas giving up several times, PSG trying to push the player to Middlesbrough, Karanka going public, then Jese getting his way and going home to Gran Canaria, a disappointing debut was probably to be expected.

Spanish newspaper AS gave Jese a zero mark in their spades rating system. That’s not because he only came on in the 67th minute, but because he missed two very good chances which contributed to Las Palmas losing 1-0 to Granada, who had been bottom of the table before the match.

If Jese is going to succeed anywhere this season then it surely has to be Las Palmas given he’s got everything he wanted with the move. Middlesbrough was never really appealing to the 23 year old, and he’s been welcomed as the big star he’d like to be at Las Palmas. 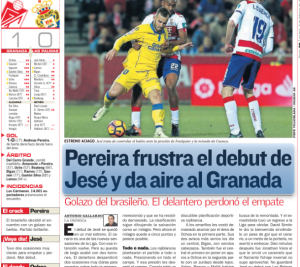 The same match saw another alleged Middlesbrough target shine. Andreas Pereira, on loan at Granada from Manchester United, scored an absolute cracker to win the match, and subsequently got a great rating from the Spanish media.

Pereira turned 21 years of age last month, if Jose Mourinho can’t find a place for him in Manchester United’s squad next season, it could be worth Karanka picking up the telephone.