On Monday we had a look at Espanyol’s goalkeeping situation, and how it’s becoming increasingly clear the club are planning for life without Pau Lopez. The 22 year old is currently on loan at Tottenham with a view to a permanent deal, and Espanyol seem to be treating him as good as gone.

With impeccable timing, Catalan newspaper Sport report on Tuesday that Mauricio Pochettino has decided to sign Pau permanently, using Tottenham’s €7m clause to do so.

Pochettino is said to be committed to the goalkeeper’s long-term future at Tottenham, with the club’s coaches left ‘very satisfied’ with the player in training. On Pau’s part, it’s said that from day one he accepted his role as third choice goalkeeper, and Pochettino was clear on that from the beginning. 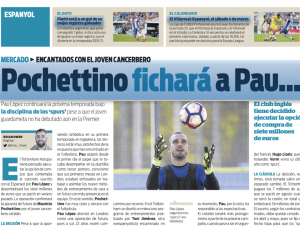 Pau has responded to intense training carried out by Toni Jimenez, and matched expectations in the process. Sport report that next year Pau will be Tottenham’s second choice behind Hugo Lloris, with Michel Vorm ‘living his last year’ at Spurs.

Vorm has a contract until June 2018 at Tottenham, and has proven to be a good back-up goalkeeper for Tottenham. If Pochettino truly sees Pau as the long term option for Tottenham then it would make sense to move Vorm on, as he’s hardly going to accept being third choice.