Andrea Schianchi is a big fan of Carlo Ancelotti.

Writing for his Gazzetta dello Sport Sunday column, the Italian journalist explained to his audience just what a good job the manager is doing at Everton.

To describe why things have worked well for Ancelotti at Goodison Park, and throughout his career generally, Schianchi brought food into the story: ‘Carlo Ancelotti is a good cook and anyone who has had the opportunity to taste some of his dishes, perhaps created from scratch, knows something about it, looking at what’s in the refrigerator or pantry and mixing the ingredients wisely.’

This is, as the column goes on to explain, the same method the manager has for football. He looks at what is available to him and comes up with a process which will see the best possible result, rather than being overly committed to any one philosophy or tactical system.

Schianchi says Ancelotti ‘doesn’t care about possession’ and is a good example of ‘healthy pragmatism’. This means he’s not afraid to build a defensive wall when required, and if a situation is best approached by throwing long balls in, he’ll do that too.

All of this has seen Everton go through various approaches this season, as their manager looks for the best solution to immediate issues, rather than trying to fit the players available into a philosophy.

One example of this, from Ancelotti’s earlier career, is when he implemented a Christmas tree formation at AC Milan, to get the most out of those available to him. 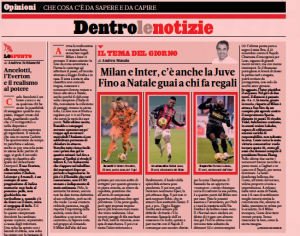 Schianchi ends the column by saying: ‘He is showing that a good coach, just like a good cook, is not about using the best ingredients to put on the table a delicious dish, but the one that, making do with what he has, proposes a lunch or dinner from which he gets up full and satisfied. Today’s Everton, after a year of care from Ancelotti, has become a team that can look into the eye of the phenomenal Liverpool, and this is not for everyone.’