Ianis Hagi initially arrived at Rangers on a loan deal from Genk in January and his transfer was made permanent in May.

The 22-year-old has been putting in impressive displays for the Scottish Premiership side this season and has one goal and eight assists to his name in all competitions.

Things weren’t easy for the Romania international last year. Having joined Genk from Viitorul Constanța in the summer of 2019, Hagi struggled for regular opportunities with the Jupiler Pro League side.

The attacking midfielder wanted to move elsewhere after just six months, which is why Genk fulfilled his wish to join Steven Gerrard’s side.

Hagi’s former teammate Joakim Mæhle was of interest to Marseille in the summer, but the deal never materialised.

When talking about the Dane’s disappointment over a failed summer move, Genk technical director Dimitri De Condé discussed why his side allowed Hagi to move to Rangers.

“Those are not pleasant phone calls [with Mæhle]. But at such a moment the interest of the club comes first and you do your job. I am glad that we recently had a good chat, in which things could be clarified. It was not the right time for a transfer,” De Condé was quoted as saying by Het Belang van Limburg.

“We understand his disappointment, it also had to do with the situation we were in then. We had just put in a bad performance in Beveren and wasted two more points in the 95th minute. Since then we took six out of six, which also changes the situation for the player.” 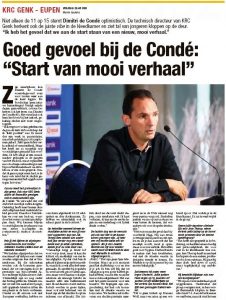 “It was a different case from Hagi, for example. He was convinced that he should play more and if you feel that it is getting difficult, you should be open to leaving. The same was true of Nygren.

“This has nothing to do with their qualities, but with the situation in which they threatened to end up. And Mæhle is extremely important to us at the moment.”