Home Europe ‘Very important’ Tottenham ‘in the lead’ to get manager – Divorce with...
SHARE

Even if Simone Inzaghi, on paper, doesn’t tick the boxes Daniel Levy wants for the next Tottenham manager, ignoring his availability would be foolish.

The Italian did some tremendous work at Lazio over the past few years, and with his future seemingly far from Rome right now, he is set to be free as a bird this summer.

Yet to agree a contract renewal with the Serie A side, the manager will be without a job on June 30th, making him a target for a few clubs.

Lazio have already targeted Gennaro Gattuso as his successor, clearly planning without Inzaghi for now, and while the 45-year-old could still put pen to paper to a new deal, it’s looking less and less likely by the day.

With Fiorentina also looking for a new manager as Beppe Iachini leaves his post, Corriere Fiorentino look at three potential targets, with Paulo Fonseca in the lead with 60% probability of being hired.

Inzaghi is third on that list (Gattuso second at 30%) with 10%, and it’s made clear the reason for that is the competition to sign him. 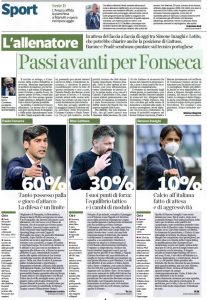 It’s stated that while he is ‘particularly attractive’ for Fiorentina, the fact there are ‘various very important clubs’ after him, with ‘Tottenham in the lead’, makes him a difficult acquisition.

The fact that Spurs are at the front of the race is repeated twice in the same article, with the emphasis suggesting there might be something in this.

He may not be the young, attacking manager Levy wants at the Tottenham Hotspur Stadium, but as we said in the opening paragraph, overlooking Inzaghi at this stage could end up being a mistake.