Swapping Guingamp for Brighton & Hove Albion Women this summer, Léa Le Garrec is having the time of her life in England’s southwest.

Wanting to try an adventure abroad after spending the first 12 years of her career in France, the 26-year-old signed for one year with the Women’s Super League club, making her debut at the weekend in a 0-0 draw with Bristol City in front of a crowd of 3000 people.

Following the fixture, she sat down with Ouest-France to discuss her adaptation in her new environment and the differences between France’s and England’s first divisions.

She said: “I think it’s a lot more intense than in France. There’s a lot of attacks and counter-attacks, it’s fast paced… I think there’s more sprinting, more pace. Plus, next week we play against Chelsea and then the cup… It makes you dream.”

Le Garrec also touched on her and her Brighton teammates’ daily routine, as they normally kick things off with an 8.15am breakfast, followed by training at 10am.

Lunch is next around noon with the rest of the team, and the working day then ends with either another training session or some time in the gym.

As for the money in the WSL compared to France’s top-tier, Le Garrec explained: “Financially, it’s about the same. I’d say at Brighton, a player earns around £2k/month, with some of the rent covered. Well, at Chelsea and Arsenal, it’s probably more. And you have to know that abroad, so in England, we don’t get match bonuses.” 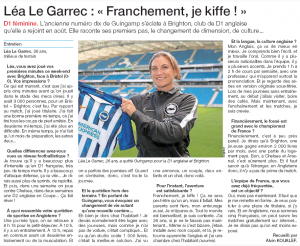 Despite having to rent a spare room and live with a couple, two children and a cat, the four time France international is really enjoying herself.

She said: “Honestly, I’m loving it. It might just be for a year, but I needed to do it. My parents are proud, as are my entourage. Everyone is nice. I’m happy. I’m 26, so if I didn’t do it now… Even if it’s a bit weird. I was living with my boyfriend and now I’m back to learning English and renting a room!”

Now focusing on the next year or so of her career (studying one to two hours of English a week), Le Garrec just wants to get back to full fitness, and only then will she start thinking about the France national team.

If she does go, she wants to be ready, because when she returns, it’ll be to ‘be in the first-team’.