Rennes coach Bruno Genesio has admitted his concerns about his side ahead of their Europa Conference League clash with Tottenham this week.

The French side take on Spurs in the start of their European campaign on Thursday as the two meet in Group G.

They’ll face a Tottenham side looking to bounce back after a disappointing weekend that saw them lose their unbeaten start to the season courtesy of a 3-0 defeat to London rivals Crystal Palace.

Things have not been going so well for Genesio and his men, though, who currently sit 11th in Ligue 1 after five games, with three defeats, two draws and just one win to their name.

Sunday saw them beaten comfortably 2-0 by Reims, a result which saw Genesio admitting after the game that he didn’t like the way his side looked.

That seems to be his stance ahead of the clash with Tottenham, with him admitting he remains worried.

“It’s up to us to find solutions together and for me to make the right decisions. 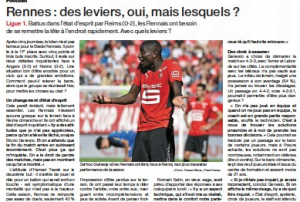 “This could mean some players being benched, but at the moment, there are not many solutions, especially in defence.

“On the bench on Sunday, seven of the nine players were from the training centre and were under 21 years old.

“If I wasn’t worried, I’d be unconscious. If we show the same face, there is reason to be worried.”