Home Europe “I may not be an astronaut either” – Player on collapsed Middlesbrough...
SHARE

Neven Subotic almost signed for Middlesbrough last summer. Everything was agreed and Aitor Karanka was set to get his man, only for the then Borussia Dortmund player to have trouble during medical tests.

It was found that Subotic needed an operation, and Middlesbrough weren’t prepared to take the chance of him being fit soon. In November Subotic suggested the move could happen in January, but Middlesbrough didn’t return. Perhaps they made the right decision, Subotic didn’t play a match until mid February of this year.

Rather than that being for Middlesbrough or Dortmund, Subotic took to the pitch for FC Koln, who he signed for in a bid to prove his fitness. With over 600 minutes of Bundesliga 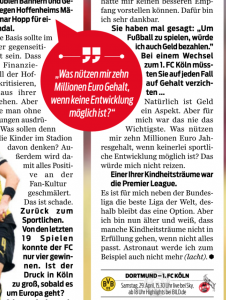 football under his belt, Subotic has come back, but he’s not at the level he once was.

Speaking to German magazine SportBild, Middlesbrough nearly man Subotic was asked about missing out on his dream move to the Premier League: “For me it is the best league in the world next to the Bundesliga, so it remains an option. But I am now old and know that some childhood dreams don’t come, I may not be an astronaut either.”

With Middlesbrough looking set for relegation, and FC Koln in 8th place, Subotic may be relieved the move didn’t come off.