Born in 1996 (doesn’t that make you feel old!) there’s a good chance Diogo Jota’s father will have had dreams of his son becoming something like Paulo Futre, a legend of Portuguese football.

The now 52 year old played for clubs in six different countries and represented his country more than 40 times.

In 1987 he came second behind Rudd Gullit in the Ballon d’Or, having played for Porto and Atletico Madrid in the previous year, and in that year he was also named Portuguese Footballer of the Year, as he had been the year before.

Therefore, it will be nice for Jota that Futre has used some of his Sunday Record column to send praise to the Wolves player after his goal against Chelsea in midweek.

‘In the six championships in which I played (Portugal, Spain, France, Italy, England and Japan) I scored in all but one. Between August and November, at West Ham, I had a lot of clear opportunities, but the ball never wanted to go in and I did not have the privilege of celebrating a goal in one of the best leagues in the world. For this reason I imagine the joy that Diogo Jota felt when he made the first goal in the Premier League and also after the game because his goal gave the win to Wolverhampton against Chelsea. Congratulations Diogo, and let this be the first goal of many more in the Premier League!’ 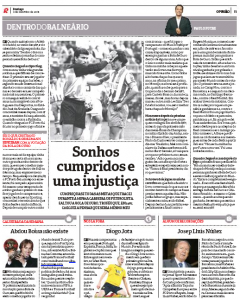 There’s a great deal of goodwill in the Portuguese media towards Wolves, as the club’s fans will know, and there’s also a lot of interest in Jota’s future.

Hopefully, Futre’s message makes it through to the 22 year old, and also his proud family.