Marian Shved arrived at Celtic from FC Karpaty Lviv in the summer of 2019 and went on to make only three appearances in all competitions in his debut season in Glasgow.

Last summer, the Bhoys sent the winger out on loan away from Parkhead at KV Mechelen, where he was restricted to just over 100 minutes of action across the first 19 league matches.

The 23-year-old’s attitude and commitment towards the Jupiler Pro League was cited as the reason for his limited opportunities in the first half of this campaign.

Mechelen manager Wouter Vrancken was highly critical of the Hoops owned player in December and the Ukraine international had also received a warning from his compatriot and former footballer, Oleg Yashchuk.

Shved blamed himself for not being at his best in the first few months at Mechelen during an interview with Het Nieuwsblad on Thursday. He has since turned things around for himself and has now explained how one incident helped him bring this positive change.

“It’s not about how you start the season, but how you end. It’s true that at first, I got few opportunities to show myself. My own mistake. I trained, but didn’t really try my best,” the Celtic winger said.

“When manager Wouter Vrancken gave an interview in early December in which harsh words were said about me, I changed my mentality. It motivated me and suddenly I felt that I could make a difference here. I trained harder and thus gained the coach’s confidence.” 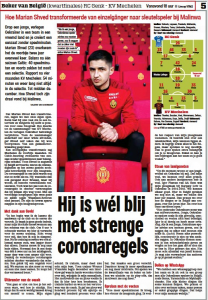 “I suddenly gave myself a 100 percent on every sprint and went 100 percent for every ball. That made a big difference.”

“That gave me more chances to play and even more motivation. Now we play the quarter finals of the cup and we have a view of the play-offs, which motivates me even more.”

Although the Celtic loanee’s numbers aren’t that impressive, [three goals and an assist], he has been featuring far more regularly [10 league appearances] in this calendar year for Mechelen.