Home Europe Celtic player with attitude problems warned it could be his last chance...
SHARE

Celtic took Marian Shved from FC Karpaty Lviv in January 2019 and immediately loaned him back to the Ukraine side until the end of that season.

Having return to Glasgow for the 2019/20 season, the winger made a handful of appearances for the Bhoys and was left out of the match day squads for most of their fixtures of the last campaign.

Neil Lennon’s side allowed the 23-year-old go out on loan at KV Mechelen during the last transfer window. He has made only five league appearances and in his last appearance, the Celtic man came off the bench to score the winner against Royal Excel Mouscron.

Earlier this month, Mechelen manager Wouter Vrancken publicly expressed his frustration over Shved’s issues at the club, which includes putting ‘himself above the group’ and regularly arriving late for training and team meetings.

Today’s edition of Gazet van Antwerpen explains it was not just the Belgian side’s coach, even their players were frustrated with the attitude problems.

They state Shved has been ‘petulant and uninterested during training, communicated with no one, forgot his football boots during training and also regularly showed up late for team meetings’.

It’s claimed those who know the player are ‘not surprised’ by his behaviour. It was for these reasons, things didn’t work out well for him at Sevilla and Celtic.

People from the entourages of other Ukrainian players who are in the Jupiler Pro League were brought in to talk to Shved. According to the report, they have made him realise the time with Mechelen could be his ‘last chance’ in Europe.

The newspaper adds the Celtic man has held talks with Vrancken and after that, he has ‘turned the switch’. He now ‘trains sharper and harder’, and Shved’s behaviour in recent weeks has been encouraging. 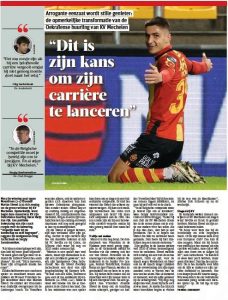 “I hope for him that he has now really understood the message. Whether this is his last chance at a European club? I cannot say that. But if he loves football and wants to get the most out of his career, he has to do everything he can to succeed at KV,” Iachtchouk said.

“You can have bad luck once or twice, but not three times. Then it is up to you. Now is the time for him to click and launch his career for good. It would be great if KV succeeded. Who knows, it may yield the Ukrainian national team a new player. The ball is in his court.”