Home Europe Hull City with better chance to get defender this time after January...
SHARE

Summer may be a good opportunity for Hull City to sign the FC Copenhagen defender Mathias Jørgensen, better known as Zanka.

As reported by the Danish newspaper Ekstra Bladet today, the Tigers have already made an attempt to buy him in January with an offer of 50m Danish Kroner (about £5.5m).

And as the player’s contract expires in 2018, there are good chances he will be sold now, although it’s not mentioned how much Copenhagen would demand for the transfer. 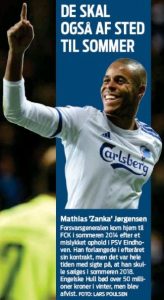 Back in February, Hull’s approach was made public in Norway, and Zanka told the local media that a Premier League opportunity is always interesting, although he knew he wouldn’t be sold because of his importance to the team and the little time for them to find a replacement.

But his contract situation could force Copenhagen to sell him now instead of losing him for free next year, and if Hull City confirm their stay in the Premier League, this is definitely a transfer that we could see happening.