Huddersfield Town made it to the Premier League for the first time in their club’s history last season.

They were successful in avoiding relegation after managing to avoid defeats at the hands of Manchester City and Chelsea in the last three matches of the previous campaign.

David Wagner brought Jonas Lossl from Mainz on a loan deal in 2017 and after spending one season with the English club, they signed him on a permanent deal.

In his debut season, the Danish goalkeeper kept 10 clean sheets, which includes two clean sheets against Pep Guardiola’s side and Watford in his side’s last five fixtures.

The 29-year-old gave an interview to Danish newspaper Tipsbladet and explained in detail about his feeling after his side avoided relegation in the final week of 2017/18 season.

“Personally, it was the highlight of my career for me. To help get rid of relegation in that struggle and watch the way we did it. The last weeks of the season were a completely wild roller coaster ride. One week we were down, so up and down…” Lossl said. 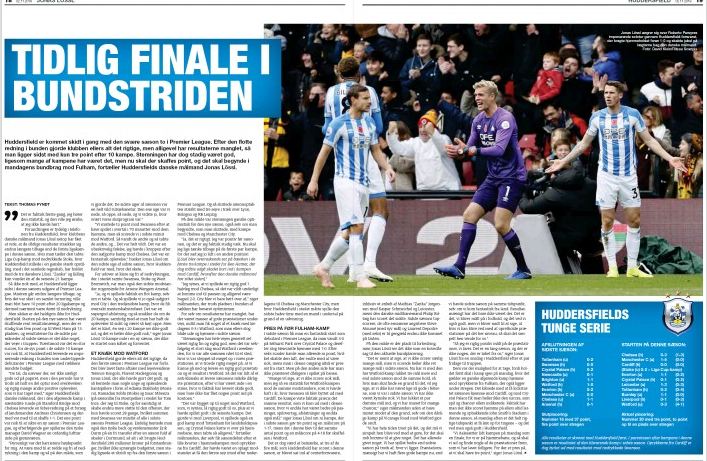 “We lost two points against Swansea, but then we scored in the last minute against Watford. Then they won a few of remaining fixtures and then the others lost a few of their matches in the end…

“It was totally wild. I had this indescribable feeling in the body after the match against Chelsea. It was a fantastic experience.”

Huddersfield are at the bottom of the table and after 10 matches, and are yet to register a win in the league.