Home Europe “It’s hard to say no to Liverpool” – Player explains why he...
SHARE

As Portuguese midfielder João Carlos Teixeira continues to live new experiences away from his home country, he’s full of stories to tell.

It’s newspaper A Bola who features an interview with the 27-year-old today, asking many things about his time at each club he’s been at.

The two-page conversation obviously has some special room for Liverpool, to whom the player belonged between 2012 and 2016, and had his first years in professional football.

Despite having few chances to play for the Reds first team and going out on a couple of loans, Teixiera still believes he did the right thing by moving to Anfield.

“I was 18, it’s hard to say no to Liverpool, it was a unique opportunity. I went and I don’t regret it,” Teixeira told A Bola.

“I had wonderful experiences, I played with great players, things were happening. I don’t regret going. I still played eight games, seven of them under Klopp.

“I was fortunate to pass through very good places, very important clubs. I’ve had better experiences than others, but I’ve always been treated well almost everywhere. I’m 27 years old, I’ve been to good clubs, but I never thought about it. I’ll just think about it at the end of the career (laughs).” 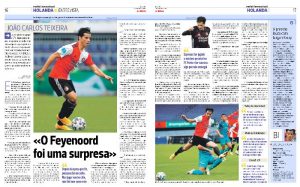 Teixeira also answered a few questions about Jurgen Klopp and the intensity imposed by Liverpool since the German manager took charge.

“It was very good. He’s very intense in training, it’s noted that he’s also so in life. He really wants to win, he always wants to do things well. Follows the route with conviction and everything is working.

“We worked on a lot of different types of pressure. Just see how Liverpool play now. As soon as they lose the ball, the pressure they put on is a crazy thing. In training, we prepared how we were going to pressure. Sometimes he was going to put pressure on the central defender, other times the 6, it depended on the other team. Explore their weaknesses. He took all the information from training to the game. Quick reaction and the eleven knew what they had to do. It looked like an orchestra, everything moved at the same time.”

Teixeira left Liverpool for Porto in 2016. He then played for Braga and Vitória de Guimarães in Portugal, but chose to leave his country this year, as he signed for Feyenoord in a €1.6m deal.