Home Championship Fulham’s insistence in including clause was the reason why deal for winger...
SHARE

Fulham’s pursuit for Sporting winger Jovane Cabral was one of the many rumours which faded away once the Premier League transfer window closed.

The Championship side were said to be in talks to sign the player on a loan deal, and at the time, the Portuguese press didn’t come up with a reason as to why the negotiations collapsed.

But the story is recalled by newspaper Record today, who explain the transfer didn’t happen because Fulham insisted in getting a buying option for the player.

The outlet explains that Sporting still see a lot of potential in the 21-year-old, so although he hasn’t had a lot of playing time lately, the club believe he shouldn’t leave permanently. 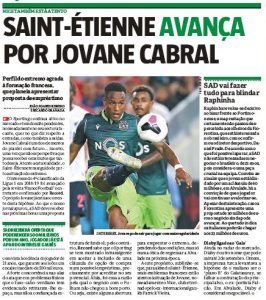 Record’s story talks about an interest from Saint Étienne, which was first reported by France Football and then confirmed by the Portuguese outlet.

The Ligue 1 side are willing to pay €500k to get Jovane on a loan deal, and Sporting are said to be open to this possibility.