Home Championship Fulham player is a ‘colossus’ – A ‘wall’ to protect, and transfer...
SHARE

Fulham’s André Frank Zambo Anguissa has been an excellent loan signing for Napoli this season, with the Italian media often falling over themselves to praise the midfielder.

Such was his early good impression, there were claims Napoli would look to move quickly to make his loan move permanent, so that they avoided competition from elsewhere.

That was quickly shot down, and since there’s even been suggestions the Serie A club will try to negotiate the around €15m it’s thought they need to pay Fulham to make a deal happen.

That seems on the cheeky side, but then that’s Napoli and Aurelio De Laurentiis all over.

Lorenzo Insigne is the club captain and has a contract expiring in the summer, and his agent recently revealed Napoli have only offered around half the salary he’s on at the moment, just to give a picture of the drama around the club.

Back to the Fulham player, Sunday’s Gazzetta dello Sport called him a ‘colossus’ ahead of the match against Inter Milan. A ‘wall’ ahead of the Napoli defence, he’s adding aspects all the time which impress the Italian media. 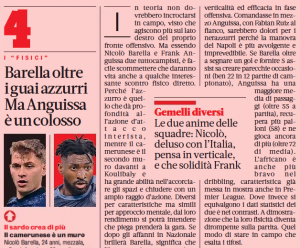 Inter won the match 3-2, yet Anguissa was still rated as having had a good performance, with Gazzetta giving him 6.5/10, a good mark for them and none of his teammates got higher.

Transfer talks will inevitably be on the way, and Fulham need to prepare themselves for all the fun and games De Laurentiis will bring.