Argentine newspaper Olé today features a front page about the ‘Mission Impossible’ that River Plate have ahead of themselves, which is to keep striker Julian Alvarez for one more season.

The outlet writes that besides the big European clubs which had already been following the 21-year-old this year, the likes of Atletico Madrid, Bayern Munich and Manchester United have now joined the race for him.

Those sides are all attracted by the great campaign the youngster has just had with River Plate, who finished the season with 24 goals and 15 assists in 46 games, being the club’s main star in their path to the league title.

Regarding the interest from the Old Trafford side, it’s only claimed that they’re ‘one of the new interested clubs’, with their call being made ‘in last few weeks’.

It turns out that all those who made contact for the signing heard the same thing: Alvarez is only leaving River Plate for the price of his release clause, which stands at €20m now and rises to €25m in the final ten days of the transfer window. 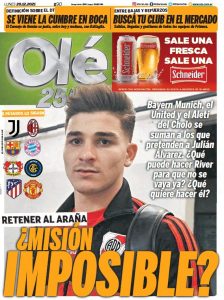 Olé says some clubs felt able to afford that amount, while others find it impossible to have him without paying over the long term.

It’s only explained that despite River Plate’s wish to keep Alvarez and hand him a new contract, as his current deal expires in December 2022, the player should now sit and listen to all the options. It’s said there won’t be much news until the first days of the transfer window in January.

The Argentine media had previously covered something about Red Devils interest when a claim came out from the Italian press. However, Olé apparently takes this as something new because they finally learned it from their own sources, so we can probably take the chase more seriously now.