Of several poor signings Southampton have made in recent years, Sofiane Boufal will go down as one of the most disappointing.

The Frenchman arrived at St Mary’s from Lille in a £16m deal, and there was a lot of hope that he’d turn out to be a good signing.

However, 59 games for the Saints have produced just four goals and three assists, but a loan spell with Celta Vigo last season helped reignite his career a little bit.

Boufal is likely to be one they move on this summer and Marseille are keen on him, likely as a replacement for Lucas Ocampos, who is on the verge of a move to Sevilla. 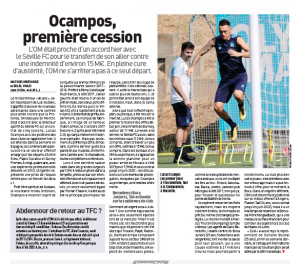 L’Equipe cover Marseille’s plans today and confirm that Boufal is one they are looking to add to their frontline.

They also say that Marseille’s sporting director Andoni Zubizarreta met with Boufal’s agent late last week and for his part, Boufal is ‘attracted by the challenge’ at Marseille.

The newspaper doesn’t mention whether any negotiations between the two clubs have been started, or what sort of price tag would be involved.

Given Marseille’s need to sell this summer to comply with FFP it seems unlikely they’d be able to offer big money. Conversely, it’s doubtful Southampton would be willing to let him go on the cheap either given their original outlay on him.

Until they can reach some sort of agreement on a price, or even a loan deal, Boufal will have to wait for his move.