In dire need of a left-back this summer, Newcastle focused on a number of players, among which was Youssouf Koné.

The Lille defender was targeted by a couple of other Premier League sides, such as Leicester and Norwich, but the only one the player has mentioned properly since is the interest from Steve Bruce’s side, doing so in an interview with magazine Lyon Capitale this month.

The 24-year-old was bought by the Ligue 1 club to replace Ferland Mendy, who went to Real Madrid this summer, and Koné explained his reasoning for choosing to stay in France over a move to St James’ Park.

He said: “Lyon made an approach and I didn’t hesitate for one second. I told myself: I’m going. The project attracted me. I followed Ligue 1 from Mali and Lyon was a team that always played well. If I was looking at the financial side, I would have gone to Newcastle, but I chose the sporting project”. 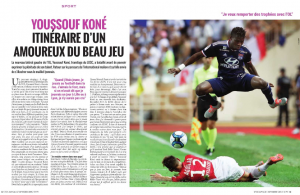 The defender also explained having someone like Juninho Pernambucano on the phone talking to him about why he should move to Lyon was extra motivation, as the Brazilian was appointed the club’s director of football over the summer.

He arrived as part of a new regime alongside Sylvinho, who replaced Bruno Génésio, perhaps providing a more attractive setup than what Steve Bruce could offer at Newcastle.

Then again, that didn’t put off Joelinton.