L’Equipe bring a big Arsenal story on Friday, which is in two halves.

The first half is about Laurent Koscielny potentially leaving the Premier League club this summer, and it sounds very much like it’s come from someone close to the player’s camp.

The French newspaper say the match in Baku could be the defender’s last for Arsenal, ‘especially’ if they don’t qualify for the Champions League.

At 33 years of age, the player is said to be ‘looking for a new challenge’. Talks had begun on an extension with Arsenal, but there’s been no positive outcome yet, and Koscielny feels he can continue at the highest level for ‘two or three more seasons’.

L’Equipe say the idea of a move is ‘more and more tempting’ for the player.

AC Milan and AS Monaco have had interest, and Rennes are also looking at the situation. The club most interested is Bayer Leverkusen, who finished fourth in the Bundesliga and subsequently qualified for the Champions League. 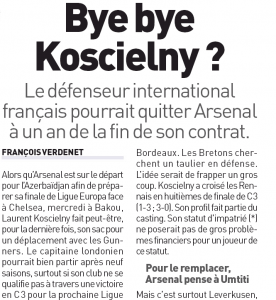 L’Equipe believe the Barcelona defender would be available for around €60m, but recent Spanish claims suggested he could go for as low as €40m as the Catalan club look for sales.