Nicola Berti, one of the members of the 1990 and 1994 Italy World Cup squads, has given an extensive interview to Libero in Italy ahead of the competition, which his home country will not be featuring in.

Listing Peru as one of the teams he’ll be following throughout the tournament, the 51-year-old discussed all things football, including the future of Inter forward Mauro Icardi, whom he sees staying next season.

The retired midfielder was also quizzed about his very brief spell in the Premier League with Tottenham, where he was managed by George Graham.

Arriving under Christian Gross in January 1998, Berti saw the man who brought him in get fired after just three games the following season, and it all went downhill from there at Tottenham for him. 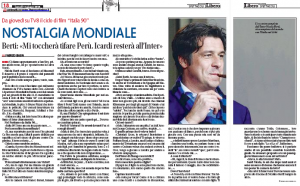 He said: “I remember that I called Klinsmann to wish him a merry Christmas, and he told me ‘why don’t you come here’, to which I replied ‘immediately!’. I also did very well. Three goals and three assists in 14 games. Then, they sacked the manager and from a regular starter I ended up out of the squad.”

Asked why that happened, he continued: “Well, the manager was a fool, former Arsenal player George Graham. He was bad, stupid. I lived on Fulham Road, but Tottenham’s ground was an hour and a half from the centre, and Graham wanted me to go and live there. I mean, do I come to play in London to go and live in the countryside?”

Following the arrival of the ‘fool’ Graham at Tottenham, Berti swiftly exited White Hart Lane to end up at Alaves in Spain, where he stayed until 2000.

After that, the former Italy international went to Australia, where he played for Northern Spirit for six months before finally retiring.