Argentine newspaper Olé features today the latest updates on Lucas Torreira and his wish to join Boca Juniors in the summer.

The Arsenal midfielder, who’s been loaned to Atlético Madrid until the end of the season, is looking return to South America at all costs.

Olé published an interview today which the player’s father, Ricardo Torreira, has given to Radio Continental, where he confirmed the 25-year-old wants to join the La Bombonera side as soon as possible.

“Lucas doesn’t know Argentina, but he’s a Boca fan as a boy. Obviously it’s the first option for him, but I have already received other calls from Brazilian teams in case Boca does not happen,” said Ricardo Torreira.

“Lucas is suffering a lot being alone there in Europe, we’re seeing how we can accompany him this month and a half that he has left until the end of the season. When you lose a person as it happened to us, so dear, you realise that life passes you by elsewhere. If Lucas wants to come to Boca, let him come.” 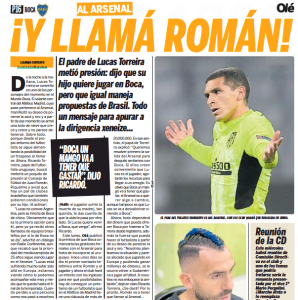 “We want to resolve the exit from Arsenal first and then sit down with Boca. If they think it’s convenient that Lucas is the player, they’ll exhaust the resources to reach an agreement. It’s obvious that Boca will have to spend, Arsenal will want something in return, although it’s not that Lucas is going to lose value by coming to Boca.”

Lucas Torreira recently lost his mother, and spent the week in Argentina, which is why Olé point out he wants to stay closer to his family now.

The outlet also writes that the first contacts the midfielder had with Boca Juniors happened last week, in a call with club president Juan Roman Riquelme, and more conversations are expected between now and the end of the season.

Torreira has a contract with Arsenal running until 2023, but with few minutes played for Atletico Madrid, a permanent move to the Colchoneros is practically ruled out, so the Gunners must find a solution for his future.