Timo Werner agreeing to join Chelsea took the Blues transfer spotlight away from Hakim Ziyech in recent weeks, but the arrival from Ajax could easily prove to be just as exciting.

Sunday saw Ziyech have his last training session with the Dutch club, and he spoke afterwards about the mix of feelings he’s going through right now. Cleary excited to be moving to the Premier League with Chelsea, he’s also a little sad to be saying goodbye to a club he genuinely loves, and to teammates who have become good friends.

De Telegraaf quote Ziyech as saying: “The players here have become more friends than teammates. It feels strange, but the realisation is now that it is really the last time. I have always felt at home here.”

Ziyech will officially join Chelsea on July 1st, bringing his time with Ajax to a close. He joined the club in 2016, in what De Telegraaf describe as a ‘panic purchase’, and managed to excel. 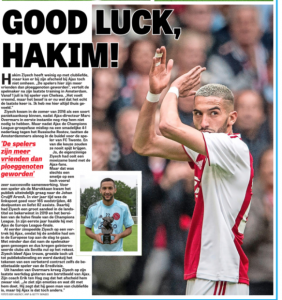 In 165 matches for the Eredivisie side he’s scored 48 goals and contributed a very impressive 82 assists. Always wanting to only leave Ajax for a big move, he’d previously rejected advances from Sevilla, but couldn’t say no to Frank Lampard’s side.