The closer we get to the summer, the more the transfer rumours ramp up, and Everton aren’t escaping it.

The arrival of Carlo Ancelotti at Goodison Park turned into a field day for the Italian media, who have had a lot of fun sending many players to Merseyside in their column inches, with a few sticking, such as Allan and Moise Kean.

Another who could make that trip is Alex Meret, who, should he sign, would arrive as a Jordan Pickford replacement.

The 24-year-old is currently in a rotational system with David Ospina under Gennaro Gattuso, a situation he doesn’t appreciate. 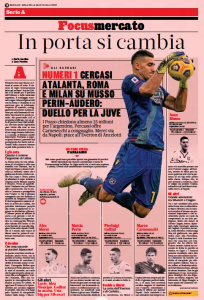 In fact, Gazzetta dello Sport explain that ‘cohabitation between the two is becoming more and more difficult’ and ‘the young goalkeeper will not accept another season’ living the same situation.

That’s why he ‘listens to offers to leave Naples’, with Ancelotti having ‘been an admirer of him’ since their time together at the Italian club and ‘wanting to bring him with him to the Premier League at Everton’.

Meret is currently valued at around €20m, which would allow Napoli to make their initial expenditure back.

He’s being ‘courted’ by Everton, and when Ancelotti wants something at Goodison Park, he tends to get it.