Even though Peru’s adventure in the 2018 World Cup didn’t last long, the tournament was still a positive for Everton linked winger André Carrillo.

Currently returning from a disappointing loan spell at Watford, the Benfica player has shown his potential in the matches against Denmark and France, and may use them as a showcase for the future.

After the game against France yesterday, Carrillo was praised by the Real Madrid defender Raphael Varane, who said the winger ‘created a lot of danger’.

These quotes are being covered by the Portuguese press today, where there’s some expectation on what will be of Carrillo’s future in the summer window. 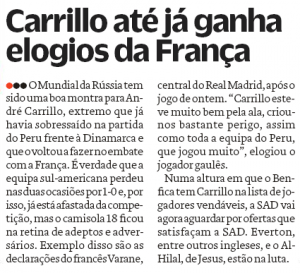 Newspaper O Jogo takes Varane’s quotes as a good sign for Benfica, who will now just wait for the offers for the Peruvian international.

The newspaper claims that Everton, ‘among other English clubs’, and Al Hilal are in the race for him.

Earlier this week, claims from Portugal said that Benfica are looking to make €20m with Carrillo’s sale this summer, with the club president Luis Filipe Vieira not understanding why the player flopped at Watford.

So if even Vieira admits Carrillo hasn’t been doing well at a club level, they’d hope that Everton are keeping an eye on the player during the World Cup, and won’t take his Watford spell into consideration to move for him this summer.