Everton are ready to make a €60m move to try and sign striker Andrea Belotti from Torino this summer.

That’s according to Tuttosport, who insist Everton are among the Italian’s growing list of suitors.

Belotti has been in good form this season, bagging 15 goals in all competitions.

Naturally, talk of a big-money move has been rife, and if Tuttosport are to be believed, it is the Toffees who will be at the front of the queue.

They report that Belotti is in ‘real danger of an attack’ with several clubs in Italy, namely Inter Milan, Napoli and Roma all courting him ‘brazenly’.

It is Everton who are set to make the ‘most interesting’ offer for him, however, as they have €60m, in cash no less, ready to go.

Whether that is enough to tempt Torino into a sale isn’t mentioned, but it is made clear the Serie A side would be reluctant to let him go.

They plan to build their team around both Belotti and goalkeeper Salvatore Sirigu, both of whom ‘feel well’ at the club and are inclined to stay. 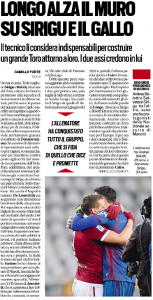 Both players also have contracts until 2022, so there is no pressing need to sell at this point either.

This is not the first time Everton have been linked with the striker’s signature, with Tuttosport claiming earlier this month that Ancelotti was ‘very interested’ in him.

We claimed at that point that a move seemed unlikely given the Blues have more pressing needs elsewhere and that remains the case, particularly if they’d have to spend €60m to get him.