Everton are interested in Torino’s Andrea Belotti but will have to fight off a whole host of clubs to secure his signature this summer.

That’s according to Tuttosport, who report the 26-year-old is one of several big names at the club that could leave this summer.

Torino are currently just two points outside of the relegation zone after a disappointing campaign and, as is always the case, their star players have subsequently been linked with moves away.

The club are attempting to ensure they can keep these players, such as Belotti, but they are waiting for ‘important guarantees’ from the club first.

It’s claimed that these players ‘don’t trust’ those in charge of the club anymore and all have ‘interesting proposals’ from elsewhere.

Belotti, in particular, has a whole host of clubs keen on his signature and, according to the newspaper, Everton are among them.

They state that Carlo Ancelotti is ‘very interested’ in the 26-year-old, presumably having been keenly aware of him during his time at Napoli.

Indeed, he would have to compete with his former club for the striker’s signature, with Gennaro Gattuso having specifically asked for his signature. 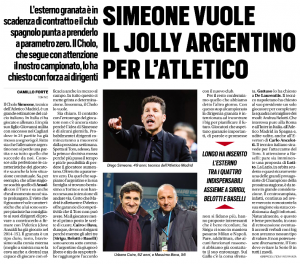 Roma, Inter and Atlético Madrid are also keen, meaning Everton will have to fight off stern competition should they decide to make their move.

Adding a striker to their squad is unlikely to be among their priorities this summer, though. Ancelotti already has Dominic Calvert-Lewin and Richarlison at his disposal, while there is also plenty of faith in Moise Kean too.

Belotti would be an expensive signing to make just to add another body, with it far more likely the Blues will look at another young forward to add to their forward line instead.