With Willian making it clear he’s having a hard time to renew his contract with Chelsea, it’s not surprising to see a number of clubs being linked to him.

According to Turin newspaper Tuttosport, it’s now time for Juventus to be interested in signing the Brazilian in a free move.

An issue for this signing would be Willian’s relationship with Maurizio Sarri, since the two of them didn’t really get along well at the Stamford Bridge side.

But Tuttosport says it may not be a problem, given Juventus have proved it before by having Leonardo Bonucci back at work with Massimiliano Allegri in the past. 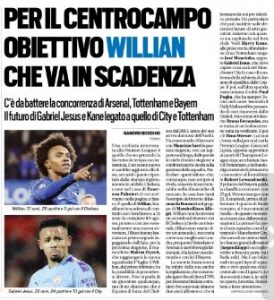 Tuttosport writes that Willian’s family would like to stay in London, and that’s the main reason why Arsenal and Tottenham Hotspur seem to have moved first.

However, Juve are not giving up on the signing, and should have the competition from Bayern Munich as well.

With the London interest and a poor Sarri relationship, Tottenham and Arsenal look to have the better chance.

‘In the stands for 6 months’ – Anger builds as potential move to Newcastle appears, punishment possible

“It wasn’t my fault” – Frenchman reveals why Arsenal deal never happened, ‘would have accepted immediately’

‘In the stands for 6 months’ – Anger builds as potential...

“It wasn’t my fault” – Frenchman reveals why Arsenal deal never...