Everton are set to turn their interest in Juventus midfielder Adrien Rabiot into a ‘concrete proposal’ ahead of a potential summer move.

That’s according to Tuttosport, who say that Carlo Ancelotti’s side are showing an ‘unwavering interest’ in the French international.

It’s explained that after ‘caresses’ in the recent past, the Blues are planning a firm approach for Rabiot, who Ancelotti is a big fan of after launching his career during his time in charge at Paris Saint Germain.

Indeed, this relationship between the pair is seen as an ‘additional element’ to be considered when analysing the potential of a deal.

Juventus, for their part, are considering a sale as they look to raise funds and free up space on the wage bill.

Rabiot is one of the players they are considering letting go as his performances have been ‘less satisfactory than expected’, and he currently earns €7m a year plus bonuses.

Juventus would be willing to accept a deal worth €15-20m for him, or include him as part of an exchange for another player to keep his value higher. Recent reports indicated they could use players to try and get Moise Kean back from Everton. 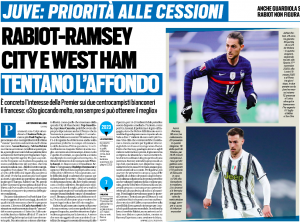 The biggest issue is his wages, which he would ‘hardly accept’ to lower and could convince him to stay in Turin despite his struggles.

Tuttosport make no mention of whether that figure would be a difficult one for Everton to match, but given their recent financial results and wage structure, it is easy to imagine it would be.

That remains to be seen, but a deal is there to be done if they want it, with Juventus open to a sale at the right price.

They will have to be quick if they do, though, with Manchester City also said to be pondering a move for the Frenchman.