Everton walked away from Stamford Bridge with a point as their clash against Chelsea ended in a goalless draw on Sunday.

The Blues had registered 15 shots, four of which were on target, but Jordan Pickford’s impressive display in between the sticks stopped the hosts from finding the back of the net.

Marcos Alonso had an opportunity to give Maurizio Sarri’s the lead in the first half, but his strike was blocked by the England international.

After the break, Alvaro Morata came close to beating the former Sunderland man, but the goalkeeper was successful in pushing the ball out, resulting in a corner.

The 24-year-old’s stellar performance for the Merseyside club against the FA Cup winners has seen him make it to La Gazzetta dello Sport’s European Team of the Week.

Pickford, who has of course been selected for the England squad for the two international fixtures, received a rating of 7.5 from the Italian newspaper. 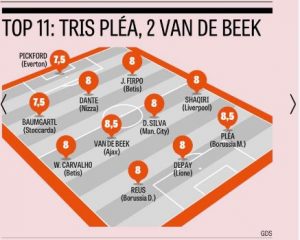 Gareth Southgate will be hoping the shot stopper can manage to keep a clean sheet in the last UEFA Nations League clash against Croatia.

This is further recognition for the Everton player. A week ago, the CIES Football Observatory report, used by bodies including UEFA and FIFA, named Pickford the sixth most valuable on the planet, with a price attached of €62.5m.