Intermediaries have been in touch with Real Betis manager Manuel Pellegrini about the Everton job.

That’s according to Chile’s La Tercera, who say there has not been an official offer from Goodison Park for the Chilean to replace Carlo Ancelotti.

The newspaper reports that they have been in contact with Betis regarding Pellegrini and what his situation currently is.

The Spanish side have insisted he is ‘doing well in Seville’ and pointed to the fact that he has two years remaining on his current deal.

However, those close to the coach have confirmed that ‘intermediaries’ from Everton have ‘made contact’ with the former West Ham coach about a potential move.

They are not the only ones either, with Fenerbahce in Turkey, who have a ‘long-standing desire’ to Pellegrini, also having been in touch.

Betis are absolutely determined to keep hold of their coach and, anticipating interest when they hired him, ‘established a high exit clause’ in his contract and sources close to La Tercera say that is $4.5m. That figure halves at the end of next season. 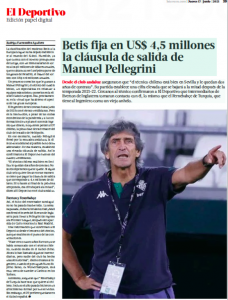 His success in Betis is not going unnoticed, though, and the newspaper has backed up reports from England that Everton have been in touch.

They quote a source as saying, “three or four years ago Everton had already contacted the Chilean coach when he was in Chinese football. Now some intermediaries have called him, but no one from the club has made a formal offer.”

With the furore around Benitez and no new manager in sight, though, do not be surprised if the idea of Pellegrini reappears sooner rather than later for Everton.