Home Europe Everton man not a ‘priority name’ for club – Belief he would...
SHARE

James Rodriguez isn’t a ‘priority name’ for Porto in this window, with the club not seeing him as a needed signing right now.

That’s according to Record, who say the Colombian is not a player the Portuguese side are particularly interested in.

Reports on Thursday and Friday claimed that Everton had opened negotiations with Porto for Luis Diaz, and a deal could be close, although the Portuguese press have failed to back that up today.

They say Everton need to up their offer for the forward and convince Porto into a sale, while the inclusion of Rodriguez isn’t a big selling point.

It was claimed Porto boss Sérgio Conceição isn’t a big fan of the club’s former star or bringing him in, and Record go into a little detail on that today.

They say that while Rodriguez has stated on Twitch several times that he’d like a move back to Porto, he is not a ‘priority name’ for the club or Conceição’s coaching team.

They would prefer that Luis Diaz remains at the club, with them considering him a ‘cornerstone’ for their aims this season. 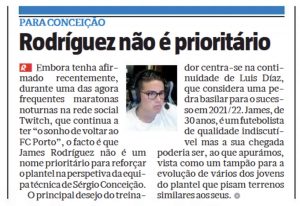 Furthermore, while they believe in Rodriguez’s quality, they believe he would actually be a ‘buffer’ to several of the youngsters in the squad who play in his position.

Those two factors, and the newspaper doesn’t even mention how Rodriguez would be an ill fit under a fire and brimstone manager like Conceição, mean Porto aren’t all that keen.

Of course, opinions can always be changed, and that is surely something Marcel Brands is working on as we speak, so this is nothing final.

However, from the reports today and now this, it appears Everton have work to do to convince Porto to both sell Diaz and take Rodriguez at the same time.