You know when you’re playing Football Manager or FIFA and you send someone to the transfer list?

Did you ever wonder what the process was to inform all other teams that he’s available? Of course, agents play a role, sending messages around to let teams know their clients are up for grabs, yet wouldn’t it be much simpler if there was a website or an app?

Well, now there is, and Everton, among many other teams, are looking to benefit from it.

It’s called TransferRoom and it’s a fairly new project started by Jonas Ankersen, with clubs still trying to find out more about it.

A big convention took place in Madrid that saw various representatives from clubs mingle to learn more about the online platform, and Marco Silva’s side were present.

That’s what Marca are reporting on Monday, listing Everton among the clubs at the event, alongside local rivals Liverpool and other Premier League teams like Manchester United. 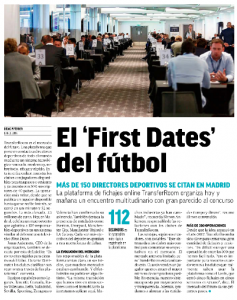 TransferRoom allows clubs to list the player they want to get rid of on the system, thus alerting all other sides of his availability and allowing them to make a move if they so wish.

It’s stated the shortest amount of time for someone to move has so far been one minute and 52 seconds, while the biggest fee paid for a player through it is currently €23m.

It’s a new way of doing things, and one clubs, like Everton, are clearly interested in using in order to reinforce their teams down the line.

If it makes life easier for everyone, it just makes sense, doesn’t it?