Just like every other person who follows the transfer market, Everton fans should now be aware that Sporting midfielders William Carvalho and Adrien Silva have been seeking a move to England for a while.

For years, there have been strong rumours that English clubs would be close to signing these players, and Everton been mentioned a couple of times.

On Wednesday, two different Portuguese newspapers claimed Ronald Koeman’s side is a possible destination for both players. O Jogo links the club to Adrien Silva, and Correio da Manhã does the same with William Carvalho.

The cases are a little different. Since last summer, when Leicester City got close to signing him, it’s been very clear that Adrien wants to leave Sporting. 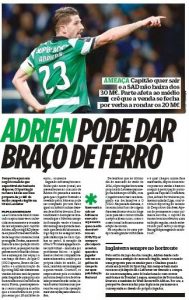 The Foxes had a €30m bid rejected at the time, although the Portuguese press believes this amount should be enough this summer. Still, the latest updates say the player’s agents believe a deal could be done for only €20m.

The price for Carvalho would be the same for Everton, standing at €30m. But he has a more important role in Sporting’s team, as there’s no other defensive midfielder to do his job.

So it’s more likely Sporting would play a harder game to keep him, despite reports of his will to leave for England as well.

In any case, it’s interesting how Everton are always 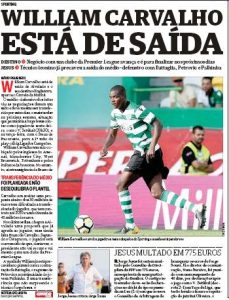 being pointed out as an interesting club, but with a lack of reports saying there were bids or talks for these players.

It’s unclear whether Everton are just another name thrown into the chase, something motivated by the new found wealth at Goodison Park.

Everton have the resources to buy either player, should they so desire, or could even go for both in a €50-60m double deal, but Ronald Koeman surely has other priorities.

Leeds United player gives his side on controversy – Speaks out...